“This is a multi-level disaster like we have never done before,” Doug Stringer said today, referencing how SCA has operations going on simultaneously in three different phases of relief: 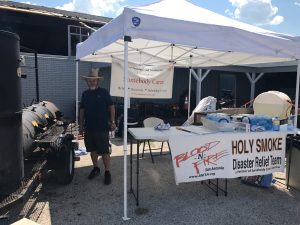 Rockport, Aransas, and Port Lavaca: Having suffered extensive damage from Harvey’s 130mph winds, but not flooding, these areas have moved out of Phase 1 (Rapid Response and Rescuing Lives) into Phase 2 (Regrouping for Continuing Relief and Recovery). “We’re expecting a big influx of people returning this weekend,” says SCA Field Rep Mark Roye, who has been working in that area since Day 1. Stores are opening up, and people will be needing tools for clean-up, such as boots, masks, gloves, rakes, etc. “We’ve expanded to serving 4000 meals a day through Mercy Ships in partnership with Somebody Cares and our Holy Smoke team,” Mark says, “and will soon be moving into Aransas, Port Lavaca, and rural areas.”
Houston: Though many areas are still under evacuation and inaccessible, Houston is still operating in Phase 1 relief but nearing the transition into Phase 2. With the rain has stopping, flood waters beginning to recede, and roads are opening up, aid is now making its way to many locations. 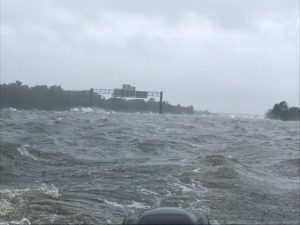 Beaumont, Port Arthur, Jasper/Newton Counties: These areas were hit very hard last night. Somebody Cares Jasper/Newton had seven church shelters set up, but some of them had to relocate evacuees in the middle of the night because of flooding.  Miles and miles of I-10 between Houston and Beaumont is like a river. They are in need boats for rescues and lots of extra prayer!
“I’m praying that, as the Church continues to be a city on a hill, united to heal a nation divided, God would use us to bring healing to the polarization in our nation,” Doug says.

Many residents in transitional shelters being transferred to George R. Brown Convention Center and to other cities. Reports have said 10,000 will go to Dallas, and 5-7,000 will go to Austin. FEMA is expected to start opening hotels to evacuees, as well. 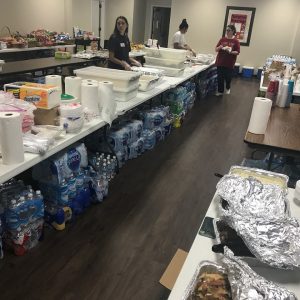 Mike May from Somebody Cares Humble visited several church shelters in that area and says: “Many of these shelters opened on faith, some with as little as one 12-pack of bottled water! But they have been overwhelmed by outpouring of generosity.”
Lakewood Church actually opened up with so many supplies that SCA was able to locate other church shelters in need and re-distribute the over-abundance to shelters operating in Stafford and South Houston.
A Net That Works:
Supplies and offers to serve continue to come in from around the country. One local church has teams from at least 20 other churches who want to come and serve. Trucks of supplies are coming from Oklahoma State University and awaiting direction on where to deliver. The Foursquare Church headquarters has chaplains and other supplies, and a West Houston restaurant has offered to provide hot meals at no charge.
A trainer who was involved with Ike relief in Galveston is producing training videos for relief volunteers when we are ready to receive teams, and Cowboy Church in Tatum, Texas, is concerned about the livestock and has offered to bring down trailers and horses.  A dialysis provided has even offered services to those who are in shelters and in need of their treatments.
SCA Vice President Jodie Chiricosta received a call earlier tonight from someone doing relief work in downtown Houston. “They had supplies like clothing, shoes, baby strollers, and hygiene items, plus 1000 hot barbeque meals that needed to be distributed.” She contacted New Life Church, and they picked up all the supplies–including the meals–in their box truck, not knowing where they could take them since all the shelters had already served dinner. “They ended up feeding 1,000 first responders at a staging area in Memorial City Mall!” Jodie says. “What a great story of God’s providence!”
Updated Needs List:
If you have a load of new/approved items to deliver, email  [email protected] with details and where you are coming from so we can direct it to the most appropriate location for distribution.
Please continue to pray for all those affected by Hurricane Harvey; those who are responding with such great compassion; and governmental leaders at all levels who are under tremendous stress to serve so many. Please also consider a generous donation to help with immediate needs and the long road to recovery ahead for millions of Texans!
Help Now!
Thank you for caring!