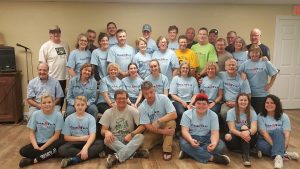 A team of 34 volunteers, many of them skilled laborers, traveled 1200 miles in February from Rochester, Minnesota, to serve the small community of Deweyville, Texas. Situated on the Sabine River in Southeast Texas, Deweyville was still recovering from massive floods in 2016 when Hurricane Harvey hit last summer and brought further destruction.

Team Rochester is an ongoing outreach effort comprised of more than 60 churches and non-profits who labor together to meet needs in their city. They were inspired to travel to Southeast Texas after hearing that the Christian Churches of Minnesota were sending teams each week to serve in Deweyville for the entire month of March and arranged for Team Rochester to serve the first week. Now, Team Rochester is planning more trips of their own in addition to what MN Christian Church has in the pipeline!

Pastor Charles Burchett, director of Somebody Cares Jasper-Newton Counties and pastor of First Baptist Church of Kirbyville, connected their team to First Baptist Church of Deweyville, one of our Somebody Cares relief partners. Many businesses in Deweyville have still not re-opened, he said, and some residents are living in tents, portable sheds, or homes that are moldy and need repairs. 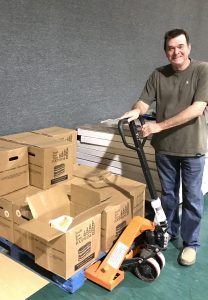 Team Rochester brought a semi-truck of drywall and other supplies, along with a dump truck and front-loader. Somebody Cares America provided two truckloads of flooring while also helping meet other needs. Brad Bickham, worship pastor at First Baptist of Deweyville, reports that when the SCA office called to see if the workers needed anything, they shared how they had been unloading pallets of boxes by hand—the next day, SCA had provided a pallet jack! By the end of the week, the team had demolished 10 homes and two RVs; removed over 100 dump truck loads of debris; and worked on 16 homes.

In an interview with a Rochester newspaper, the Post Bulletin, prior to the team’s arrival, Pastor Burchett said, “…it’s not just a bunch of compassionate, good-hearted people. It’s people with skills, so that’s going to be very, very encouraging.”

“I cannot say enough nice things about this crew!” said SCA Volunteer Coordinator Cassy Smith. “I was so encouraged to spend a few hours with them and hear all the amazing God stories from their trip to Texas.”

Recovery throughout the Texas Gulf Coast continues because of each of you who have donated time, talent, and treasure. Thank you for caring! And please consider financially supporting the on-going work of Somebody Cares!