A Small Miracle in Pilger

What would you do if everything was lost?  One minute life is good, the next you are left with nothing.  That is what happened to John, his wife, and most of his neighbors when twin tornados tore through the town of Pilger, NE last Monday.

John and his wife moved into their rental home on Sunday.  A young couple, newly married, they were excited about setting up a home and life together.  John was at work when the tornados hit one day later.  His wife made it through the storm okay. But the home was completely destroyed and they lost all their possessions. They did not have insurance. Somebody Cares responder and ministry partner, Mike Lynch, met John as he was looking through the debris for anything he could salvage. 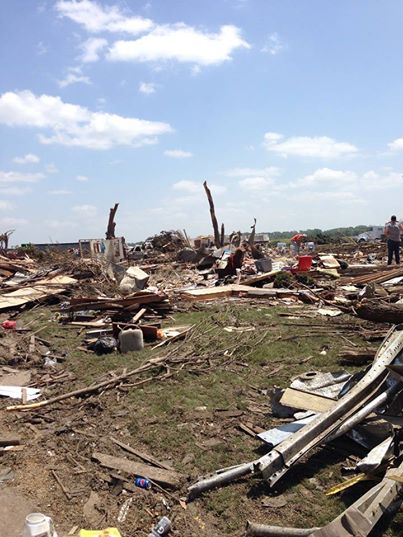 Sorting Through Debris That Was Once Home

Mike started talking with John and learned that when John got home from work on Monday he found the destruction. His two dogs were still alive underneath boards and he was able to pull them out. Everything else was gone! Mike sensed that John needed prayer, even though he didn’t want to pray. John was a welder by trade and the only thing he was looking for was his wedding ring, which was off because he could not wear it at work.

When Mike offered to pray about the ring, John said “you go ahead”.   Mike prayed and starting helping John look for 5 minutes, praying the whole time. Mike picked up a pile of stuff and a cabinet fell, the drawer opened and the ring came rolling out. John was overwhelmed by God’s answer to that small specific prayer. With tears in his eyes, all he could say was, “I can’t believe God would move and on my behalf”.

Mike’s time and God’s answer to prayer showed John the Father’s love in the midst of his pain.

As Mike surveyed the situation in Pilger and talked with pastors and other leaders it became clear that the community needs help.   Many families in the town were uninsured or underinsured. Their community industry suffered a severe blow as well when the tornados swept away the co-op and grain bins as well as damaging hundreds of ranches in the surrounding area.

Mike and a team will be returning to Pilger next week to provide hot meals, help with cleanup, and offer the hope that Christ gives. Will you help too?  A small gift today can help provide hot meals and gift cards to those who have lost so much.