ALL AGES ‘CONVERGE’ TO SHOW NEW ORLEANS ‘SOMEBODY STILL CARES’ 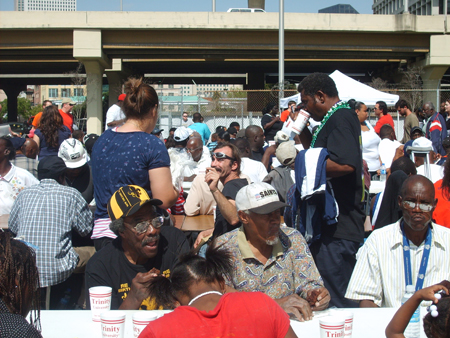 “We have a small prayer room in a small town outside of Houston TX, but I can promise you our little group of people will be praying for you,” said Pastor Rick Torrison from Pearland House of Prayer. Pastor Rick was among a contingency of pastors, ministry leaders, prayer leaders, skilled workers, and youth groups who came to New Orleans for Converge: Somebody Still Cares New Orleans, a two-week outreach to the city that began on March 10. While the work teams and youth groups labored alongside local ministries throughout the first week, others traveled to arrive for the opening night of the “Macedonia Gathering” that began on Friday, March 14, bringing all the groups-including representatives from local ministries-together at the New Orleans Dream Center. The opening session on Friday night was focused on ministry to the local pastors and ministry leaders who have been laboring tirelessly in rebuilding and restoration efforts during the two years since Hurricane Katrina.

The idea for the meetings was birthed during a two-year Katrina relief assessment trip in August of 2007 led by Doug Stringer, founder and president of Somebody Cares America/International. “While visiting local ministries,” Doug says, “there seemed to be a consistent message that there were not enough resources to meet the needs. Crime is increasing, kids are hanging out on the streets, people are battling depression and suicide-it was like a Macedonia Call for help rising up from the pastors of New Orleans to the body of Christ at large.”

Doug’s desired outcome for the Macedonia Gathering was to bring in workers and leaders from across the U.S. who would see the current situation first-hand and to hear the hearts of local ministers so they could commit to praying for New Orleans with informed intercession. He also hoped to raise awareness for material, financial, and manpower needs for long-term rebuilding and restoration. “Can you imagine what could happen if we, the church, would seize the opportunity set before us to rebuild a city that is known as ‘sin city’ on a godly foundation?” he said.

Cities represented during the weekend included Houston, Pearland, Stafford, Clear Lake, and San Antonio in Texas; Haverhill, Mass.; Nasvhille, Tenn.; Monroe and Chickamauga in Georgia; Denver, Col.; and Baltimore, Md. Some leaders represented entire networks of churches and prayer ministries, including Wes Wingo from the Angel Food Ministries network of 4000 churches and Gideon Stanley, who is connected to prayer networks in India. Prayer networks in nine nations prayed for the outreach.

Roger and Charlotte Merschbrock are the state prayer coordinators for Louisiana. “Thank you from the state of Louisiana to all of you who have been pouring your efforts into our state to seek God and set the foundation for New Orleans,” Roger said.

That sentiment was echoed by Dr. Doreen Babo, director of The Dream Center. “How honored we are to have you here,” she said. “Just your presence in this building, lifting up glory to God and raising up praise in this place is so exciting to us. We are thrilled.”

On Saturday night, just hours after former president Bill Clinton held a rally at Tulane University with a focus of raising up a volunteer army of young people, Doug and the “over 35” audience prayed over the young people participating in the Macedonia Call-those from the city and those from out of town-symbolically releasing them to their ministries with the blessing of spiritual fathers and mothers. Doug said the difference in the “army” of young people the church is raising up is that they have the “DNA” to make true lasting change through Jesus Christ.

“It’s not about passing the baton,” Doug said, “it’s about walking together. It’s the wisdom and the years of experience of the old empowering the emerging to come into their destinies.

“You can’t do it alone,” he told the young people as they stood at the altar. “But when you honor the former, the former will bless you and release you. Be who you are. Be young. Be unique. But set the standard high for purity, passion and purpose!”

As the second week of outreach concluded, work teams and youth teams worked with a new skate park in St. Bernard Parish, a block party and barbecue dinner in the Ninth Ward-with steak and ribs donated by Angel Food Ministries-feeding the homeless in “tent city,” and other outreach activities and work projects.

“We want to see ‘the city that care forgot’ become known as the city where Somebody Cares. because of Jesus,” Stringer said.