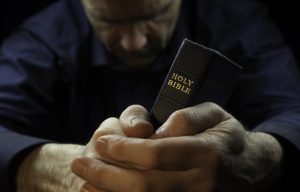 Pastor Charles Burchett has experienced God’s divine connections many times during his walk with the Lord, most recently during flood relief following Hurricane Harvey. As pastor of First Baptist Church of Kirbyville and director of Somebody Cares Jasper/Newton Counties, Pastor Burchett is a recognized and respected leader of relief efforts in Southeast Texas during times of disaster,

“I got a call on my cell phone one day from a man I’ve never met who was in great need,” Pastor Burchett shared. “He told me his name was Bill* and that he called an 800 number for help. Someone in Washington D.C. answered and gave him my cell phone number. I learned that his mother died November 27 of last year, and he got out of prison on December 7; he has no vehicle, walks with a walker, and he is a mental health client.”

After his release, Bill returned to the house he and his mother had been renting only to discover the landlord had sold it to developers who were repairing and remodeling it. The workers told him he could sleep in the house for a few nights; it had electricity but no other utilities.

Because God has blessed Pastor Burchett with Kingdom relationships, he was able to call a pastor in Mauriceville that SCJN helped after the Sabine River flood of 2016. That pastor, who lost everything in Hurricane Harvey, called another pastor who lives near Bill’s house, and that pastor and his wife visited with Bill and took him a hot meal.

And the King will answer and say to them, “Truly I say to you, to the extent that you did it to one of these brothers of Mine, even the least of them, you did it to Me. (Matthew 25:40)

“Even though I wonder who has my phone number in Washington D.C., God used Kingdom relationships to provide for one of those He calls ‘the least of them’: a physically, mentally, and socially handicapped man with no food, no furniture, no running water, no bathroom facilities, no vehicle, no friends, and actually no house.”

But there is more to this story! The next morning, Pastor Burchett’s cell phone rang again.

“When I answered with, ‘Hello, this is Charles,’ the lady calling stumbled for words and finally asked, ‘Is this number in any way related to a long-term hurricane recovery group?’

“As we talked, I found out her name is Alice,* and she is a national FEMA worker positioned in Austin with the statewide assignment of following up on unmet needs. My phone number was handed to her on a small slip of paper with the request that she find out who has this number and what it is for.”

After answering all of Alice’s questions, Pastor Burchett asked if he could talk to her about a current and very real unmet need. She agreed, and he began to tell her about the call from the previous night from a stranger in great need calling from the city of Orange.

“As I began to say, ‘He recently got out of prison and his mother di…,’ my new government friend Alice interrupted me with, ‘Wait a minute, waaait a minute! You’re telling me that last night you talked to a man in the city of Orange, Texas, who got out of prison on December 7, is that right?’

“Again I answered, ‘Yes,’ and she said, ‘I can’t believe this. My supervisor came in this morning and handed me a case file with instructions to make it my first priority. Then I get handed that little slip of paper with nothing on it but a phone number, and when I call that number you answer. My highest priority assignment is to help the man who called you last night. How can anything like this happen?’”

Pastor Burchett shared the true but amazing answer: You and I belong to and serve the Wonderful Counselor, Mighty God, Eternal Father, Prince of Peace who carries the whole government on His shoulders. And nobody in the whole world but Jesus can connect people in need and people with questions to His provisions and answers!

Only God could put together a story like this, and making ourselves available to serve allows us to be part of His divine connections!

*not their real names