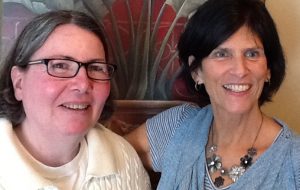 Maureen was a middle age homeless woman who could barely cope with life because of hardships she had endured. She had lost her parents many years before and had suffered a breakdown. A homeless shelter where 35 men and women slept in a tiny room on bunk beds was her home. The shelter allowed their “guests” in at 5 pm, and they had to leave the building by 7 am. She walked the streets from 7 am-5pm winter, spring, summer and fall; rain, snow, extreme heat, and freezing temperatures.  Maureen lived in a constant state of fear and had completely closed herself off from most all human interaction.

But Pastor Marlene and the Somebody Cares New England team kept Maureen in their prayers and tried to connect with her and care for her whenever they could. When Marlene reached out to her, Maureen would just smile and mumble something that could not be understood. She lived in her own private world of pain, and no one could reach her–or so they said! Until one day…

Marlene heard that Maureen was in the hospital in critical condition. When she went to Maureen’s room to visit, the social worker–a pleasant but very professional woman–was with her. Marlene asked her about Maureen’s status, and she responded professionally, “I am not at liberty to discuss Maureen’s condition with you.”

As they looked at Maureen’s frightened eyes, to their utter amazement she said, “Oh, that is Pastor Marlene Yeo. She is my pastor, she can know anything she wants. I have her as my proxy on my admission form.” They were both in shock…Maureen seemed to be cognitive for the first time in all the years they had known her. Her social worker then shared the grim prognosis: Maureen was critical, and there wasn’t much hope for improvement. After the social worker left, Marlene prayed for Maureen to be healed and cried out to God for His loving kindness.

Marlene and the Somebody Cares New England team continued to reach out with care and compassion, and they shared about God’s love with Maureen. Within one year’s time, the Lord moved in miraculous ways. Maureen not only fully recovered, she moved from the shelter into a group home with proper medical care for her specific needs. She started receiving SSDI, participating in group activities, and sharing in household responsibilities including meal planning, grocery shopping, and cooking. Only those who knew her could see what a miracle this was. Before the end of that first year, her social worker determined she was now ready to live independently in her own place.

The Somebody Cares team moved her into her own, beautiful, bright, sunny, happy place!  She was beyond overjoyed…she was in awe! Spending her first night alone in 15 years in her own home had the potential to cause her great anxiety and alarm. But she told the team, “Oh…I am not alone, He is with me.”

About 18 months later, it just so happened that Maureen’s former social worker came to the Somebody Cares outreach center. As she toured the facility, she came to the kitchen where Maureen was volunteering. She was astounded when she saw her and said, “Maureen is that you?  You look so different, you look wonderful! How are you doing?” Maureen smiled and said, “Ever since Pastor Marlene Yeo came to my room at the hospital, I knew I had a reason to live.”

Maureen is living proof to the medical profession, social services, skeptics, and the world that there is a God, and His Name is Jesus!