Reports from The Response NC and FL 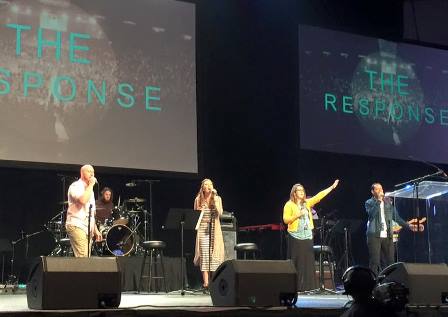 This year we were honored to help facilitate The Response: A Call to Prayer for a Nation at the Crossroad solemn assemblies in four states including Louisiana, South Carolina, North Carolina and Florida. We saw God do a mighty work through each one. He brought greater unity to the Body of Christ in those states, reinvigorated the prayers of the saints, encouraged the Church in each area, and much more!

One pastor who attended in North Carolina wrote, “I am attaching a letter of thanks. You stood with us and did what we could not—you called our state to respond to the Lord in solemn assembly. You left behind an infrastructure of relationships and ministry, on which we can build. We believe strongly that the Lord brought you to North Carolina for such a time as this and that your obedience—and the sacrificial giving of all connected with The Response—is of the Lord. “

From The Response: Florida, one attendee stated: “We believe this past weekend was historic for our state. It was beautiful to see so many denominations and prayer ministries come together for one thing…to exalt the name of Jesus. We also believe The Response will be a catalyst that will spark more solemn assemblies in our state.”

And from another attendee, “It is Sunday morning and I am still in awe of what happened at The Response yesterday in Orlando. It was the most engaging prayer gathering I have ever been in…the unity of the Spirit among the saints was amazing….one purpose, one corporate cry, one confidence that our prayers were vital and were reaching the throne…..prayer, being the greatest privilege and weapon the Lord has given His church…and we were using it together as One in Him.”

Please pray that God will continue to open doors in states across the country for His people to join together to cry out for spiritual awakening our nation. Several large prayer gatherings are being planned coast to coast in 2016 by ministries we know and love. We encourage you to participate in prayer gatherings in your area to lift up the name of Jesus over your church, your city, your state and the nation.

May His Kingdom Come!