“As we celebrate five years of God’s goodness in Baltimore, we reflect on the many experiences we have had and the stories of life change that have taken place,” says Matt Stevens, director of the Baltimore chapter.

Launched in 2010, SC Baltimore works in the areas of human trafficking, homelessness, foster care, at risk teens and violence, addiction, HIV/AIDS, and crisis preparedness. But Somebody Cares has been involved with the city even longer. In 2007, Doug Stringer began meeting with pastors, ministry leaders, and city officials in Baltimore who had a desire to see the spiritual transformation of their region. And prior to that, Matt had served on many of our disaster relief assessment teams through his Chain Reaction ministry. 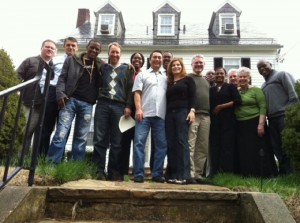 Somebody Cares Baltimore creates opportunities for outreach by connecting and mobilizing people and organizations to serve their communities together. Knowing a three-fold cord is not easily broken, the SCB strategy has been to bring together churches, local businesses, and the police department to bring lasting change. As part of “The Transformation Team,” their efforts have helped the notorious East Baltimore experience their lowest violent crime rate in 40 years. SCB also coordinates catalytic events and projects each year that serve tens of thousands of people.

ServeFest is a day when churches partner together to invest in their own neighborhoods by completing service projects such as painting, pulling weeds, and planting. Having mobilized more than 4,500 volunteers each year, the greatest impact comes from churches connecting with their neighborhoods and expressing new levels of compassion.

Going to the most violent and impoverished areas, Days Of Hope has mobilized thousands to serve more than 16,000 residents in 14 different Baltimore city neighborhoods. Kids play games and jump on moon-bounces while their parents receive free groceries and visit with service providers, from doctors to bankers. They can get their blood pressure checked, learn how to avoid foreclosure, and receive information on programs that can help set them up for success. At the prayer tent, which is manned by local churches, people receive prayer and learn about Jesus.

“The events of the day draw people in, but we desire to see ongoing life change for them as they learn more about Jesus and discover 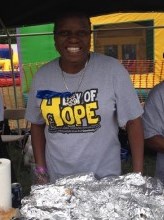 tools to help them,” says Kristen Hoover from the SCB office.

SCB also serves 300 members of the homeless community each Christmas at the Code Blue holiday celebration, named after the program
that is activated in Baltimore whenever temperatures fall below 15 degrees Fahrenheit—any shelter that has available space opens their empty beds to anyone who is homeless. Somebody Cares will visit one of those shelters before Christmas to serve brunch and perform a Christmas program, where they sing carols and share the Gospel. They also give out Bags of Hope, filled with donated toiletries, socks, and washcloths.

Two core elements driving every outreach opportunity are prayer and presence. Long before and after any event or project in a community, team members prayer walk the neighborhoods and connect with the residents there. And each Day Of Hope event includes a prayer tent with an average of 237 commitments or recommitments to Christ per event. In July of last year, SCB partnered with LifeSource to plant a church the day after Day Of Hope in Sandtown, targeting those who prayed in the tent. That church is still going every Sunday and continues to grow. Lives have been rescued, bodies have been healed, relationships have been restored, and addictions have been overcome. Another church will be planted this year. 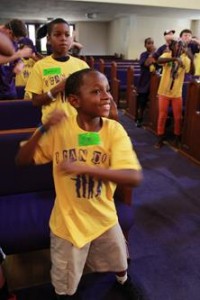 In 2014, SCB also hosted the first “I Can Do It” arts camps, with free dance, music, and art lessons for kids in Eastern Baltimore.

“Our team believes wholeheartedly in the need for ‘presence ministry.’ We have the presence of Jesus in us so that we can bring Christ to the community with our presence there,” Matt says.

Building on this foundation, SC Baltimore’s pastors have learned that what they can do together far outweighs what they can do alone. This was especially true during the recent riots that followed the death of Freddie Gray while he was in police custody. While tempers flared and emotions raged on the streets of their beloved city, pastors linked arms and marched the streets, in direct contrast to the violence. SCB and area churches helped coordinate volunteers to be on hand early the next morning to serve in the clean-up from the evening’s damages, and just to love on people. One morning, Bishop Angel Nunez helped host a meeting where over 100 pastors and bishops from all denominations and ethnic backgrounds came to pray and intercede.

“I’ve been to Baltimore on many occasions, even before our Somebody Cares chapter was started five years ago,” Doug said. “A strong foundation of unity and a network of relationships has already helped them break down many barriers and see much fruit from their labors.”

He continued: “It’s God’s heart to work through the Church to bring His manifest presence. A strong, healthy church in Baltimore can be an instrument of hope, healing, and lasting transformation.”

Matt agrees. “If this is what the Lord desires for us to do, we are certain that He will provide whatever it takes to turn our region around.”