Thankful That Somebody Still Cares! 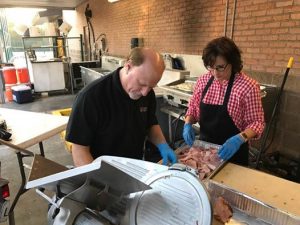 The love of Jesus invaded Baton Rouge on Saturday, November 19th as Somebody Cares and Healing Place Church served 10,000 prepared Thanksgiving style meals and distributed 1500 bags of groceries to 2000+ families still recovering from historic August flooding in Louisiana. In the midst of their struggle we wanted to remind them that they do have things for which they can be thankful.

The Holy Smoke grill team arrived in Baton Rouge on Monday to begin preparations for their largest assignment ever as part of the Somebody Cares disaster response network: 10,000 hot Thanksgiving meals to be boxed up and delivered all over town on Saturday! 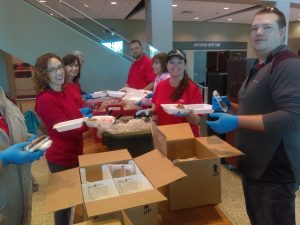 Partnering with Healing Place Church in this massive outreach undertaking sponsored by Mercury One, the team prepared and sliced 3,200 pounds of ham! Meanwhile, the church’s Cooking For Christ ministry cooked the sides, including Cajun style dirty rice, and a baker in San Antonio donated dessert.

Hundreds of volunteers gathered to assemble and box the meals. Hundreds of other volunteers came with their vehicles to be loaded with meals for delivery to families suffering devastation from the recent floods. A line of over 400 cars stretched down the long church driveway and out into the highway, waiting to serve their city.

Pastor Mike Haman said the church does a lot of outreaches to the community, but nothing before of this magnitude. “We felt like it was important in light of all that people have been through for them to know they’re important to God and that He has not forgotten them.” 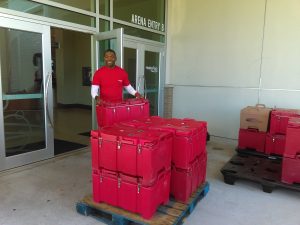 Indeed, those very words had already been the cry of one woman’s heart. When the delivery team brought her food, she teared up and said, “I thought I was forgotten, but you have given me hope that God is with me.” “We prayed, we cried, and we showed her love,” said the team.

Another woman had only been back in her house for a week. As a widow, she was overwhelmed with the difficulty of navigating the repairs by herself. She was sitting in the house crying when her delivery team knocked on the door. They not only brought her a hot meal, but prayed with her and gave her hope that she’s not alone.

A man in Denham Springs said the town would not have gotten through this time without the Christian community. Another man and his wife in Denham Springs are living in an RV in their driveway after their home took in four feet of water. “I used to hear about things like this on the news, but after three or four days you don’t hear any more and you think everything’s OK. Now that I’m living it, I know that’s not true. I can’t tell you how much we appreciate those of you who are helping. Thank you.” 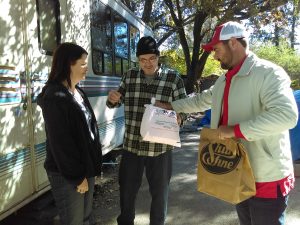 Thanks to Mercury One and Healing Place, along with partners Kiolbasa Sausage, Hill Country Bakery, and ministries in three states that partnered for the Holy Smoke grill team: BloodNFire in San Antonio TX and Muncie IN; and Ally Force and Heart Ministries in Minnesota. Together, along with each you, we were able to put hands and feet to a God-sized vision and show the city of Baton Rouge that Somebody Cares!

Even though thousands of families have months or even years of recovery ahead, they are thankful for the small things, like a wonderful hot meal; but mostly that Somebody Still Cares!

Join us this Thanksgiving to show others that Jesus cares for them too! Give a generous gift today!