WHAT’S NEXT FOR BALTIMORE? 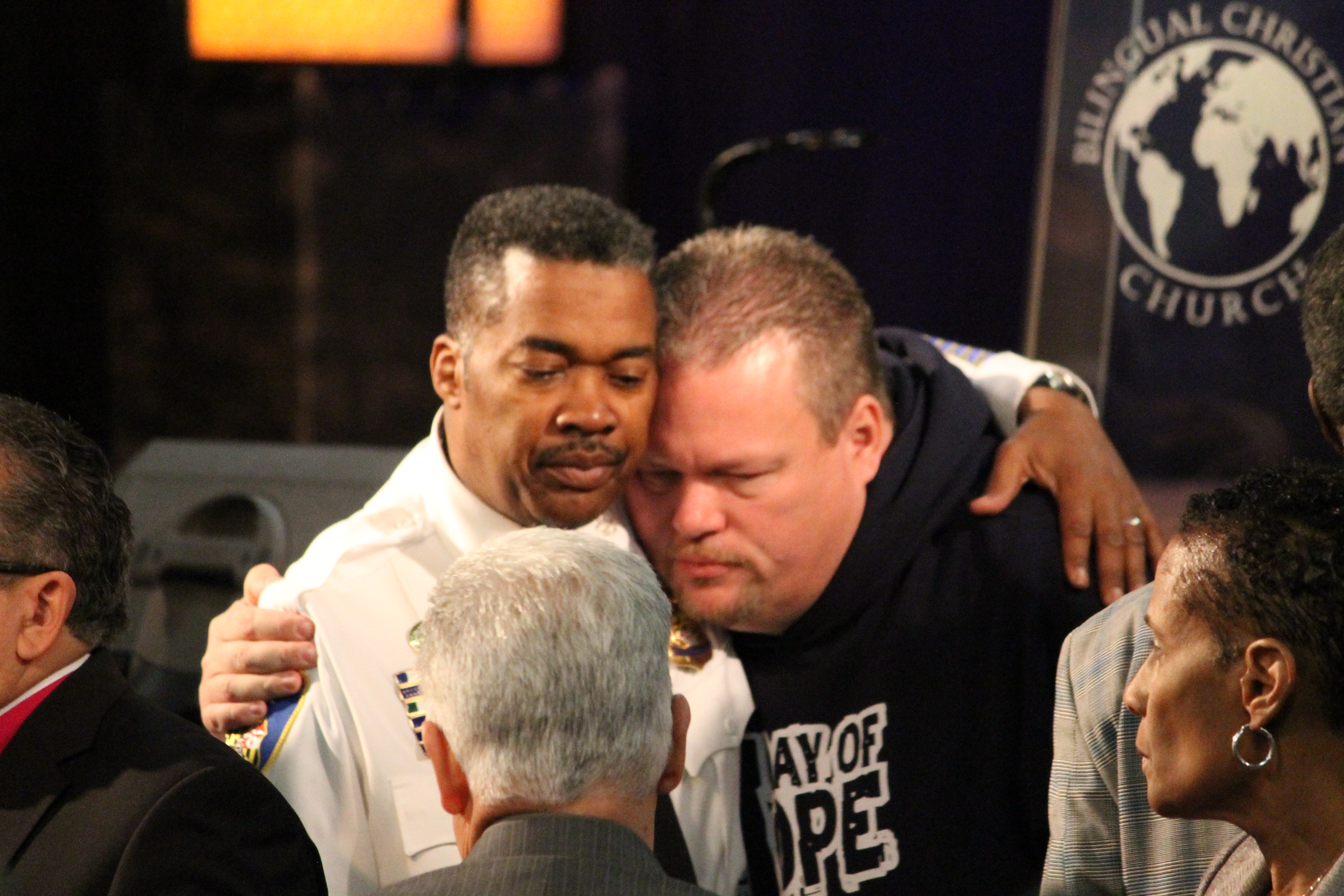 Matt Stevens of Somebody Cares Baltimore and Lt. Col. Russell of the Baltimore PD are both sons of the ministry.

Finally, on Tuesday night, there was some good news from Baltimore. The outside agitators who had come to Baltimore to incite violence had left the streets. By 1pm the streets where rioting happened on Monday were clean from residents and volunteers who came to the city to serve and bring kindness.  The mayor set a curfew, and by 10pm all was quiet. It was a long but good day, said Matt Stevens, our director with Somebody Cares Baltimore.

“Driving through the city on Tuesday,” Matt said, “it seemed like people everywhere were praying with and embracing one another. There is beauty coming up out of the ashes.”

VIOLENCE IS NOT THE ANSWER

Baltimore has been a city in chaos since the arrest and subsequent death of Freddie Gray, the young man who died tragically on April 19 after suffering a spinal injury while in police custody.  Following Freddie’s funeral on Monday, and in direct opposition to his family’s wishes, violence broke out throughout the city: businesses were looted, buildings burned, police cars battered.  But in the midst of it all were those who are still sounding the cry for peace and committed to restoring hope to the city they love.
“Baltimore’s pain runs deep, beyond what I am able to understand,” said Matt. “We have another tragedy with the life of another of one of our sons being senselessly wasted.”

The community is hurt and frustrated. The authorities are frustrated with how the system has failed. But they all agree on one thing: violence is not the way.

“These aren’t thugs, these are our kids,” Matt said. “It’s not good when outside agitators come in to our already hurting city. Violence cannot fix or heal. Violence by its very nature cannot produce justice. Voices need to be heard, so pray with us that the violence does not overcome the voices for justice and that healing may come. “

Even former Baltimore Raven Ray Lewis joined in the call for peace with a video plea on social media: “Young kids, you’ve got to understand something. Get off the streets! Violence is not the answer, violence has never been the answer.” He continues: “We know there’s a deeper issue. But this isn’t it.”

Bishop Angel Nunez from Bi-Lingual Christian Church issued a statement on Tuesday that said: “Last night our city was torn apart by groups of individuals who are angry, hurt, and violent…Yet, today we are also hurting for we are seeing one of the darkest days in our history. Our eyes are dry for we have no more tears left to cry as we see the destruction of our beautiful city.

“We have heard the calls of: no justice no peace, but we have a different call. We call for justice and we call for peace.”

THE VALUE OF HIS PRESENCE

At Somebody Cares, we believe in “presence ministry,” meaning we are called to carry the presence of God with us while being the tangible expression of Christ to those who are in need. I can’t help but wonder how much worse things could be right now without people like Matt Stevens, Bishop Angel Nunez, Bishop Johnson, Ray Lewis, and so many others, including key community leaders involved in the peace process, who are seeking God’s wisdom, praying for their city, and carrying the presence of God into a painful and volatile situation. As I often say, we need to be on-site for insight.

Even while rioting occurred Monday afternoon, over 100 pastors of all ages, colors, and denominations marched the streets with linked arms, in contrast to the violence.  Church, ministry, and city leaders put themselves in harm’s way to reach out and bring peace. Volunteers were also on hand early the next morning to help with clean-up from the evening’s activities, and just to love on people.  If it had not been for those in the crowd and on the streets bringing peace and calm, the inciting would have been much worse. Prayer and engaged presence works.

I was moved by the faith of one pastor who was part of the March for Peace, then returned to his ministry facility to find it engulfed in flames—60 units of senior housing along with a health and human services center, reduced to rubble. When asked by CNN what he saw when he looked at the raging fire, he replied:  “I see revival. I see the opportunity to re-build from the ashes. I see a church that has been resilient for 80 years and for the past eight years has been seeking to invest in their community. I see us now coming back even bigger and better than before.” Even in immense loss, this pastor is committed to responding to adversity by demonstrating the presence of God.

A FOUNDATION OF RELATIONAL EQUITY

I’ve been to Baltimore on several occasions, even before our Somebody Cares chapter was started five years ago. A strong foundation of unity and a network of relationships has helped them break down many barriers and see much fruit from their labors. SC Baltimore is part of The Transformation Team, along with churches, ministries, and the Outreach Division of the Baltimore PD. Working together across racial and denominational lines, the team has seen crime rates in some neighborhoods decrease for the first time in years. Hearts have been healed, lives have been rescued, addictions have been overcome, and relationships have been restored.

Going to the most violent and impoverished areas, The Transformation Team has mobilized thousands each year to serve more than 16,000 residents in 14 different Baltimore city neighborhoods at the annual Day of Hope. Last year, a church was planted the day after Day of Hope in the Western District—in the same neighborhood where Freddie Gray lived. In fact, his family attended those events.

“It’s definitely the existing infrastructure of unity and relational equity that has helped us and will continue to bring hope and healing,” Matt said, noting that the existing unity has grown exponentially with the advent of the current crisis. More leaders than ever have come together to help each other and plan together for the long process of restoration.  Even the newscasters have been reporting on the presence of the church in the streets.

“You often hear people say that the church is asleep,” he added. “But in a time of crisis and desperation, the church in our city is coming together.

Tuesday morning, Bishop Nunez, helped host a meeting where over 100 pastors and bishops from all denominations and ethnic backgrounds came to pray and intercede.

“We have been working for 4-5 years to establish a prayer network with about 400 churches in the mid-Atlantic area,” he said. “The answer to hate is love—God’s love. We need to release His glory, release His love.”

While the streets of Baltimore may be free from riots for the moment, things are hardly back to normal. People are still frustrated and hurting. Business owners and residents are still recovering from looting and other damages. The Baltimore Orioles and the Chicago White Sox are playing today, after two games were postponed, but the stadium will be closed to the public, empty of fans—an almost haunting reminder that much remains to be done.

During our relief work with the Indonesian tsunami and Hurricanes Katrina and Rita in 2005, we identified four stages of relief: initial response/crisis relief; regrouping for continuing relief; recovery; and restoration.  Baltimore efforts are “holding” in the initial response/crisis relief stage, as the stage is set to regroup and move forward into recovery and restoration.  As they wait, pray, and seek God for next steps they pray for the churches of the city unleash “a tsunami of kindness” and demonstrate love with tangible acts that can begin to turn the tide.

“My initial response to the question, ‘What’s next’ is that an army will continue to bring waves of compassion and kindness to wash away the toxicity that has been spewed out,” Matt said. He was reminded by a friend what God says in Amos 5:24 “Let justice roll on like a river, righteousness like a never-failing stream.”

Many of those who love and serve the Baltimore will agree that the events of this week were not caused by one tragic event; they were an explosion of frustrations that have built up over the years with roots of poverty, inadequate education, and economic and social challenges.  But the ground of desperation has now been plowed. It is time for us to sow truth, justice, love, hope, compassion and kindness for the days ahead.

Earlier this week, as I encouraged many of the church and community leaders in the area, I reminded them that we will always outlast our adversaries and adversities when we stay true to the characteristics of Christ. This week, we saw that manifest on the streets of Baltimore. Healing is gaining momentum.

The church is the heart of any community, and a strong, healthy church in Baltimore can be an instrument of hope, healing, and lasting transformation. I ask that you join me in prayer over this city,  that God will turn this tragedy to triumph, for His glory. Let this be an occasion for the testimony of the Church!

WHAT CAN WE DO NOW?

If you would like to be a part of the Somebody Cares efforts in Baltimore, below is a list of practical needs:

Your donations will help equip empower Somebody Cares Baltimore to be a tangible expression of God’s love to the hurting.  Help now!