Believers from across the Carolinas came together on Saturday, June 13, for a day of prayer, worship, and fasting at The Response South Carolina, held in the North Charleston Coliseum. South Carolina was the third state to host a “The Response” prayer gathering since former Texas governor Rick Perry sent out a call in 2011 for the Body of Christ to gather in Houston to intercede on behalf of our nation. 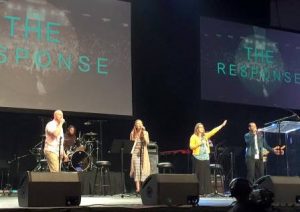 Like the previous gatherings, the day consisted of prayer for personal and corporate repentance, racial and generational reconciliation, revival in our churches, reformation in our culture, and personal refreshing. Doug Stringer, coordinator of the event, said organizers were adamant that there be “no egos and no agendas,” so that the Lord alone be lifted up. “I believe the heart of our nation and of any community is the Church,” Doug said during the event. “If the heart is sick, how can our communities and our nation be strong?” The Response: Louisiana was held in January in Baton Rouge and hosted by Gov. Bobby Jindal, who traveled to Charleston to share his testimony. Gov. Nikki Haley called for the South Carolina solemn assembly and welcomed those in attendance. “We’re here because we know something has to be done,” she said, adding: “We will never apologize for praying!” Prayer leaders included pastors, lay leaders, young people, and business people. One pastor who participated in the event said in an email to Doug Stringer, “What a blessing your team was to South Carolina! Thank you for the invitation to serve. I was so humbled and blessed to stand with you and pray for Gov. Haley… I trust God is going to continue to bless and use you to do great things for His Kingdom.” Another participant wrote: “THANK YOU, I have never experienced anything like yesterday! Six hours of Holy Mountaintop… May God hear the cry of His people and restore this land.” 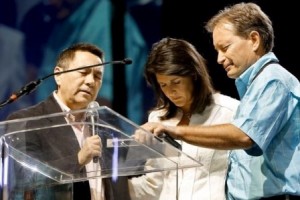 Many church leaders in South Carolina believe the Response will serve as a catalyst for what God wants to do in the State. Some say it has already served to foster greater unity among the Body of Christ throughout the state with churches and participants coming from all over, crossing racial and denominational lines. The Response South Carolina was also aired on GodTV with people joining in prayer from across the country. It was preceded by 21 Days of Prayer in preparation for the event, with over 1000 individuals participating through daily prayer emails. “This is one of many prayer gatherings God is raising up to pray for our nation at this time of moral and spiritual crisis,” Doug said. For information on The Response gatherings in the past, please click here.